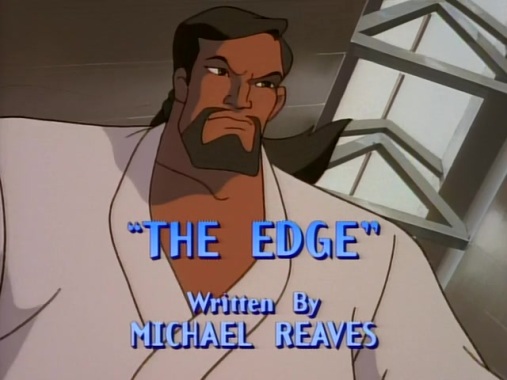 Well it’s certainly been a while.

Anyway. Last time on Gargoyles, the clan was forced to leave their ancestral home, Xanatos left prison to return to said home and a new player with his own agenda entered the game.

The episode kicks of with a sparring match between Xanatos and Owen, during the fight Owen manages to knock Xanatos down with a rather neat roundhouse kick to side kick combo to their mutual surprise.  Xanatos even remarking that this is the first time he’s lost a fight to Owen.  Owen rather delicately asks whether he’d prefer to lose on purpose next time.  Interestingly enough, Xanatos drops his usual cordial tone and curtly tells Owen that he’d fire him if he did so before moving on to a meeting with some Emir guy.

Over at the police station, Elisa is taking a television set in and is helped by some red headed guy voiced by Thomas F. Wilson.

Inside, Elisa is none too pleased to learn that her captain is assigning her a partner.  Captain Chavez brings up her recent shooting and while Elisa tries to play it off as an accident (which it was), Chavez is hearing any of it and introduces her new partner.  And wouldn’t you know it?  It’s the same red headed guy as before, Matt Bluestone.

Elisa’s still not happy about this and voices this to Matt who just shrugs it off with the “well we’re stuck together” attitude.

Elisa: There must be some kind of conspiracy going on to make my life difficult.

Elisa heads ups to the clock tower over the station with the TV where we see the Gargoyles are acclimating to their new home.  She checks in with Goliath at the adjacent library where he’s reading Dostoevsky.

Goliath’s in a melancholy kind of mood, having lost their ancestral home to Xanatos, being unable to prevent it, being strangers in a strange land, all that jazz.  Well Elisa does admit that it’s a raw deal her attempts at cheering him up don’t do any good.  And Goliath wishes he could make Xanatos feel what he feels.  You know, Dostoevsky isn’t what I would call the ideal author to read for dealing with a bad mood.  Like trying to cure a migraine with thrash-metal.

While checking out their new TV, the gang spots Xanatos on a news bit.  He’s donating a special jewel known as the Eye of Odin to the Museum of Modern Art as a goodwill gesture and as a tax write-off, because it’s Xanatos.  There’s gotta be a secondary motive to everything he does.  Or tertiary.  Anyway, the sight of Xanatos in the spotlight drives Goliath off in a fury.

Matt and Elisa are on patrol and getting to know one another.  In this case Elisa’s getting a brush up on conspiracy theories.

Matt: They’re called the Illuminati. Way l hear it, they run everything. Even the president works for them.

Elisa: You need to know something about me. l don’t care about UFOs, Loch Ness or secret societies. Believe me, the world’s strange enough as it is.

Before they can go into more detail on secret societies that may or may not exist they get called to a break in at the Museum of Modern Art where a gargoyle-shaped silhouette has broken in and stolen the Eye of Odin.

Matt and Elisa arrive just as the gargoyle figure is making off with the Eye and Matt shoots at it before Elisa can stop him.  The good news is that there’s no sound of bullets hitting flesh, bad news is there is the sound of bullets ricocheting off of metal. Which can mean only one thing…

The next night, Elisa briefs the clan on what happened and the conclude Xanatos must’ve made more of those robotic gargoyles, another ‘Steel Clan.’  They puzzle over why Xanatos would donate a priceless gem only to steal it back and Goliath decides they’ll just get it straight from the evil horse’s mouth.  Leaving Hudson and Bronx to guard their new home.

Elisa tries to warn him against going out but he’s not having any of it and heads off with the group.  Elisa runs outside to follow them but is met by Matt, she tries to brush him off again with her “I work alone” bit but he cuts her right off.

Elisa: Look this is one time I don’t want a partner.

Matt: Yeah? Well that’s usually the time you need one the most.

At the castle the gargoyles find Xanatos waiting for them just as Elisa and Matt arrive at the Eyrie Building where Owen has gone all “you shall not pass” on them.  Upstairs, Xanatos is laying down his scheme to Goliath.

Xanatos: You see, soon everyone in the Big Apple will be hunting gargoyles.

Goliath: Because of you!

Xanatos: If you want to be picky, we won’t get anywhere.

Xanatos offers the clan a place to stay upstate, a research facility, though he phrases that in such a way that anyone who knows anything about the horror genre is going to be immediately suspicious.  And despite is assurances of safety they decide to take off, probably for the best.  Might wake up with fly for a face or something equally monstrous.  Because let’s face it, the words “guests” and “research facility” really don’t belong in the same sentence.  Goliath, while infuriated, still isn’t the type to attack an unarmed opponent settles for smashing up a lamp before he and the Trio glide off.

Xanatos: You’re taking this much too personally.

Outside, Elisa spots the gargoyles soaring away and she and Matt drive off after them.  Suddenly, the gargoyles are attacked by a trio of Steel Clan robots, a red painted one shooting Goliath out of the sky, causing him to crash into the top of a building.

The fight doesn’t go so well.  The upgraded machines have a faster rate of fire, are much more relentless in their pursuit and can even discharge electrical shocks when Brooklyn tries to grapple one of them.  In less than a minute all four of them are down.  Much to the group’s surprise though, the robots cease their attack and just stare at them, waiting.  They figure that the robots are want to follow them or wait until sunrise when they revert to their stone sleep so they can capture them while they’re defenseless.  Either way, things aren’t looking good.

Meanwhile, the the fight has drawn a crowd who see the laser shots and think it’s the gargoyles again.

The fighting has also brought news crews and the police, Matt even spotting the two groups fly off through some binoculars.  Goliath decides to take the fight to a more isolated area and settles on the Statue of Liberty.  He instructs the Trio to handle the other two while he takes on the leader (the red one).  The fight goes better this time, Broadway managing to psyche one of the machines into crashing straight into the statue’s tablet.  Brooklyn and Lexington are able to divert the attention of the second robot long enough for Broadway to impale it with the arm of the first robot.

The red one manages to hold its own against Goliath even after having its laser cannon torn out, judo-throwing him and delivering a sick roundhouse kick.  It only flees when it sees the other robots have been destroyed and it’s outmanned by the gargoyles.  The gargoyles flee as well before a police helicopter shows up, carrying Elisa, Matt and a news anchor, who spot the wrecked remains of the Steel Clan.

Back at the clock tower, Elisa assures Goliath that the public believes that the gargoyles were nothing more than machines and Goliath is certainly feeling better, knowing that they thwarted Xanatos’ scheme, he feels confident they can do it again.  Elsewhere, Captain Chavez may be willing to close the book on this but Matt isn’t so sure.  Believing that he saw flesh and blood creatures through those binoculars and now determined to find out what it was.

And at the Eyrie Building the red gargoyle robot is revealed to actually be Xanatos in a power suit.

Owen: It would appear that your plan to learn the gargoyles’ hiding place has gone awry, sir.

Xanatos: Not really. I have the Eye of Odin back in my private collection, and the city owes me a favor for donating it. I successfully tested this prototype battle exo-frame. And the most important thing…

Xanatos: I was a little worried that I might be getting soft. But I was able to stand up against Goliath, the greatest warrior alive. I’d say I’ve still got the edge…

And with that the episode ends.

This episode heavily focuses on the conflict between Goliath and his clan and Xanatos and whatever asset he may be using.  And their battle goes beyond simple fights too, it’s also a battle of public image.  While Xanatos works to improve his image he simultaneously works to tear down the image of our heroes.  Despite his cordial manner our heroes know that Xanatos hasn’t reformed but can’t expose him without exposing themselves.

There’s a bit of back and forth over who truly possesses ‘the edge’ this episode.  Xanatos, unlike many other evil geniuses in fiction, is more than willing to step up physically against our heroes rather than scheme from the sidelines, and certainly has both the technology and the martial skill to back it up (I only wish he used the same move against Goliath that was used against him earlier in the episode).  The only reason the clan survived the initial attack was because he allowed it.  And if he upgraded his robots once, who’s to say he can’t do it again?

At the same time, Goliath was quick to discern Xanatos’ scheme and move the battle to where it benefited them the most.  The Trio do quite well too.  Despite appearing to be the “big, tough, dumb guy” Broadway’s able to pull off some impressive aerial maneuvers and the team shows off better cohesion than Xanatos and his robots do.  So who truly has the edge?  That may be less of a case of which side is stronger, but rather who may slip up first.

We get introduced to the Eye of Odin this episode, interestingly enough it first appeared in the Disney Interactive Gargoyles game and was later adapted into the show.

It alludes to the Norse myth when Odin gave up one of his eyes at the Well of Mímir to gain his great wisdom.  While the Eye looks differently from what it did in the game, whose to say it’s not just a pretty jewel?  Perhaps it still possesses incredible power and evil?

And finally we’re introduced to Matt Bluestone, which I may say is a great name for a cop.  Speaking of early introductions, Matt actually first appeared in the episode “Deadly Force” assisting Captain Chavez.  The biggest change to his introduction is that Elisa no longer has the autonomy she once had, now she can’t simply work with the gargoyles while on duty.

Thomas F. Wilson gives gives a rather friendly performance that’s also pretty down-to-earth.  The kind of guy who isn’t really bothered by Elisa’s annoyance at suddenly having a partner because he just seems to be happy to be working with someone.  And while it may not be ideal for Elisa’s double life, I’d say it’s fair to say she does respect him by the end of the episode.  Him being a conspiracy theorist could’ve just been a simple quirk, but he’s also seen the gargoyles, so who knows where his suspicions will lead him…

Next time, two old foes make an appearance and Hudson finally gets his own episode.

View all posts by mediahunter